The PCR (also called NAAT, stands for nucleic acid amplification technology) is a state-of-the-art technique with a higher sensitivity and specificity than other Chlamydia detection techniques, which has become the reference standard for the diagnosis of infection by this organism above the cultures, which until recently was the most used technique in the clinic.

The extreme sensitivity of these tests can detect the presence of about 20-50 bacteria in the PCR reaction. Therefore, this test is recommended in cases of Chlamydia infections without symptoms in which the bacterial load may be relatively low. In fact, many people with C. trachomatis infections have no symptoms. The following table shows the values of frequency of asymptomatic infections, on the basis described in the medical literature, which depends largely on the infected tissue.

Furthermore, the high sensitivity of PCR test for Chlamydia can reduce the window period to about 48-72 hours after being exposed to the bacteria over other screening tests where this time is higher.

PCR is recommended for the detection of Chlamydia in samples from the genitals (urethra / vaginal / cervix), oropharyngeal and anal based on sensitivity, ease of collection and processing of the sample test. In the case of genital samples the sensitivity of PCR diagnosis is around 99%, which is higher than that obtained with other tests for chlamydia as culture and antigen detection tests. However, for other samples (throat / rectum) this value is around 90%. The sample used to detect infections of the urethra in men is urine. This reduces the discomfort of not having to use swabs to collect urethral exudate. It is necessary not to urinate at least two hours before collection of the sample.

This rapid test detects Chlamydia antigens of the bacteria. A concentration of at least 100,000 bacteria in the test is needed. If the infection is very recent or is asymptomatic probably you not reach this concentration of microorganism so rapid test can not detect chlamydia infection. The window period to perform this test is 2 weeks, although if clear symptoms appear can be done before that time. 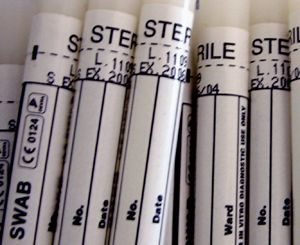 You can see the characteristics of our chlamydia tests in this video.

This chlamydia rapid test is available together with other STIs rapid tests. Knows our test packs.

What is chlamydial infection?

It is a sexually transmitted disease caused by bacterium Chlamydia trachomatis. It is most common sexual disease transmission in United States, according to data released in late 2006 .

How is chlamydia spread?

There are no concrete data on the probability of transmission or risk after a single unprotected contact with a person infected with Chlamydia. There are scientific doctors who have tried to estimate the risk of transmission depending on the type of contact work. In general, there is a high variability in the data when some jobs are compared with others and in many cases the values are over-estimated, ie they are above reality. However, it is known that transmission can occur after a single unprotected contact with a person with chlamydia and can be transmitted bidirectionally, albeit with different probabilities, through contact:

What are the symptoms of chlamydia?

Usually the infection is asymptomatic in 70 % of women and 30 % men. Both infected men and women may have abnormal genital discharge or mild urination during the first to the third week after infection pain.

If symptoms develop, they usually appear within 1 to 3 weeks after exposure. If you appear, originated in men are similar to those of gonorrhea (discharge from the penis) or rectum, burning with urination or defecation) and can also cause testicular swelling and pain, although this is rare.

When they occur, most common symptoms in women are vaginal discharge, burning during urination or abdominal pain. Biggest problem is that untreated infection may lead to pelvic inflammatory disease that can cause sterility and ultimately increase chances of ectopic pregnancies.

Can you heal chlamydial infection?

Chlamydia is easy to treat and cure and may prevent development of long-term complications. Main therapy includes treatment with appropriate antibiotics as tetracyclines, azithromycin or erythromycin. There must be a follow-up analysis at 4 weeks to determine if infection has been cured.

It is important to make an early diagnosis and early treatment to occur no more serious health problems, since untreated infection can lead to pelvic inflammatory disease and ultimately infertility.

To help prevent serious consequences of chlamydia, it is recommended that sexually active people, a screening test be performed at least once a year.

What effect does chlamydia in pregnant woman and her baby?.

A baby exposed to Chlamydia trachomatis in the birth canal can develop conjunctivitis or pneumonia. Both complications are treated with antibiotics. Chlamydia can also cause premature delivery or low birth weight. This makes it very suitable for all pregnant women to detect chlamydia specific analyzes performed, it is a simple way to avoid the complications of pregnancy and newborn.

Is there a relationship between chlamydia and other STDs?

PCR importance in diagnosis of chlamydia

As already mentioned only about 30 % of women have symptoms for chlamydia, and 70 % of men, which is why we highly recommend a reliable diagnosis of those who are asymptomatic, in order to reduce risk of complications.

Moreover, as the initial symptoms are quite generic, in conventional laboratories often treat the symptoms and screening tests are not made.

PCR technique used routinely by EMPIREO, can detect the presence of trace amounts of chlamydia from the early stages of infection, including many cases of asymptomatic infections.

After detection of disease, its treatment is very simple, which is highly recommended for routine analyzes, to avoid more serious future complications. Furthermore, positive cases in which a treatment is applied, it is advisable to perform a past exam a month of completion. Should ensure removal of bacteria, to prevent development of asymptomatic.

And if you have doubts … come see us !